Housing will be helped by strong fundamentals, but tax changes are likely to hinder high-end markets.

From the National Association of Realtors Magazine January and February 2018

The housing market in 2018 will benefit from strong economic fundamentals as job and wage growth stay solid and interest rates, although inching up, stay low. However, the upper-end housing market in high-tax states will be hit hard as a result of the tax overhaul recently signed by President Donald Trump.

Look for existing-home sales to remain the same, at about 5.5 million unit sales, NAR Chief Economist Lawrence Yun says. Home price growth will stay positive, but in a change from the last few years, prices are expected to rise only 1 to 3 percent, a significant downward shift from the annual increases of 6 percent or more over the last half-dozen years or so.

Tax reform is part of the reason behind dampening prices, Yun says, especially in expensive markets in New Jersey, New York, and California. Homeowners who had been able to deduct all of their property taxes will be able to deduct a maximum of $10,000 due to the tax changes Congress enacted at the end of 2017. “Households must now consider this limitation as they decide how much house they want to buy,” Yun says. In New Jersey, for example, almost a third of homeowners pay more than $10,000 in property taxes.

Price softening at the high end of the market will spill over into the next tier of homes to a lesser degree, but the low-end market will continue to see solid demand. “Given that the upper-end market competes with the near–upper-end market, there could be a chain reaction downward,” Yun says. “The next tier price points will see some price reductions to remain competitive as upper-end prices buckle.” 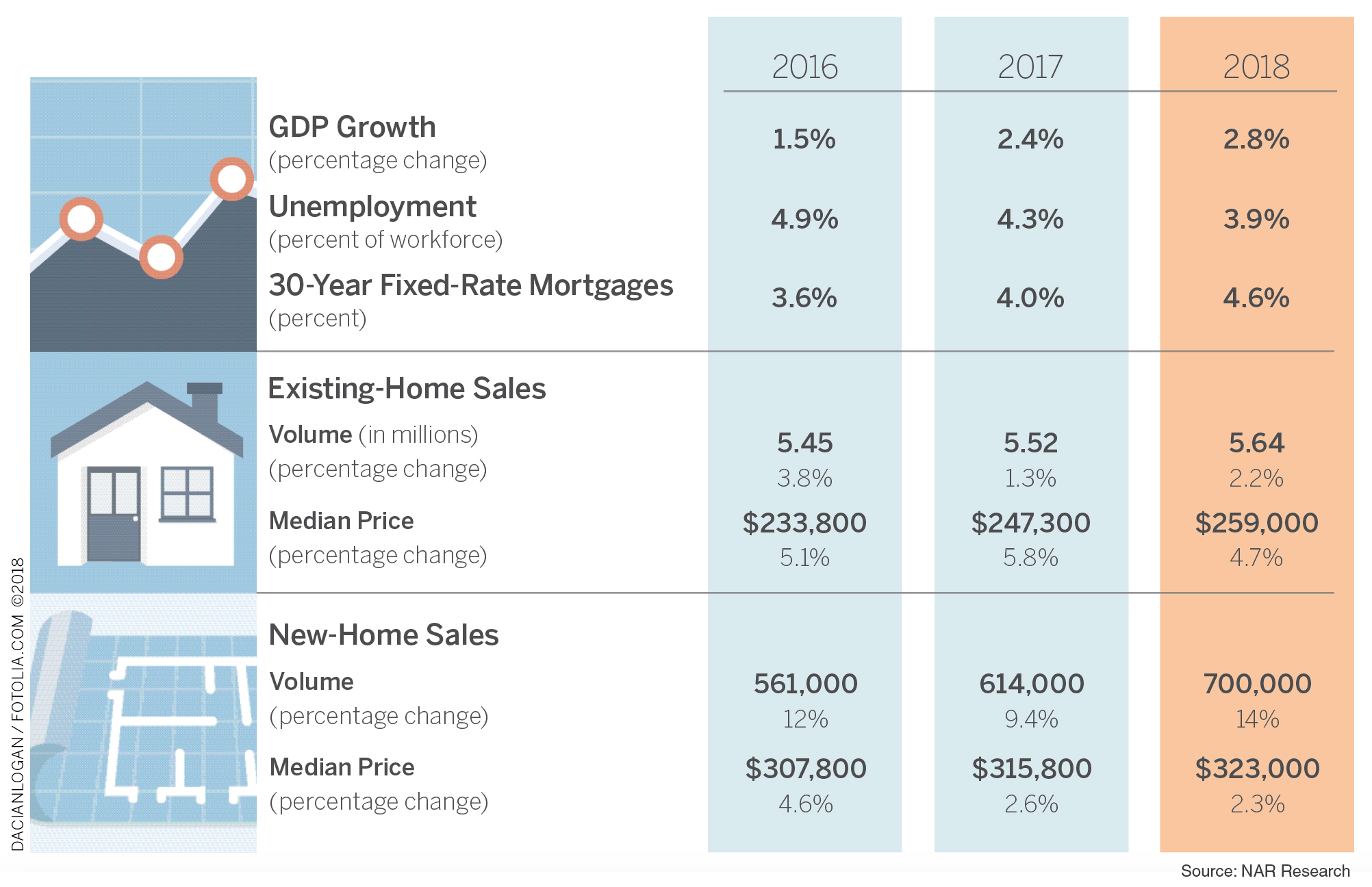 Mortgage interest rates are expected to rise, too, as the already tight labor market constricts further and as federal budget deficits grow, further dampening the market.

On the plus side, the tax changes are expected to provide some boost, at least in the short term, to the economy, fueling some gains in jobs and wages and increasing the ability and confidence of households to buy.

“For the first year, it’s fairly certain there will be some fiscal stimulus from the bill,” Yun says. “More jobs and higher wages should provide a steady flow of housing demand.”

Still, with inventory shortages persisting in many markets, the positives are unlikely to translate into much home sale growth for the year. “Pressure in the starter home market will persist because there remain too few homes at this price point to satisfy demand,” he says.

Yun will be watching closely to see whether residents from high-tax states will migrate in significant numbers to lower-tax neighbors as a result of the new law, as wealthier households seek to mitigate their property tax hit. “There could be benefits to neighboring states,” he says. Pennsylvania might benefit from migration out of New Jersey, for example, or Wisconsin and Iowa might benefit from migration out of Illinois.

“What the new-home sales data tell us is that builders can sell whatever they build,” he says. But don’t expect too much new inventory to come on the market, because shortages of skilled labor continue to hobble growth.

This Blog is a Post of an article from Realtor magazine - January | February 2018 issue. BY ROBERT FREEDMAN