I am proud to be a real estate broker and investor in Keller Williams Sun Valley Southern Idaho. In January, KW was named the #1 real estate franchise in the country for global agent count, sales volume, and sold units. Thank you to all of my loyal friends and clients for helping make KW #1. 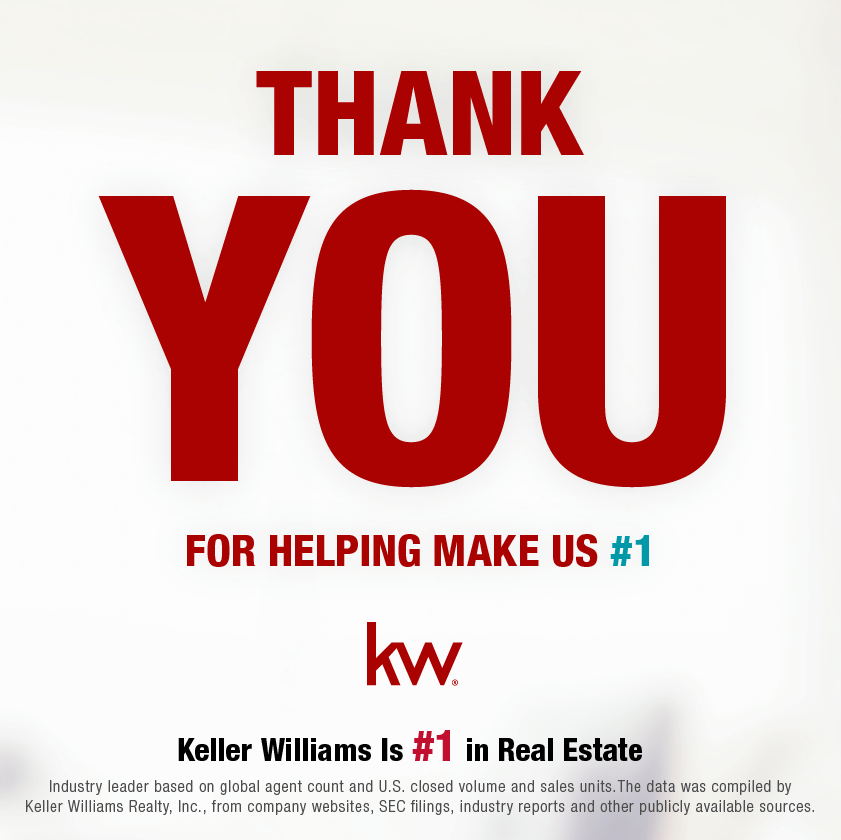 Home is Where Our Stories Begin. Here's the KW Story.

In one of the most stunning David and Goliath stories in real estate history, Keller Williams has surged past industry giants like RE/MAX, Coldwell Banker, and Berkshire Hathaway HomeServices to become the number one real estate franchise in agent count, closed units, and closed sales volume in the United States*. In 2017, the company’s 155,000 U.S. agents closed more than 1 million units, generating more than $300 billion in sales revenue.

“We’re proud to be in business with associates who are focused on growing big businesses so they can fund their lives and create opportunities for their families,” CEO John Davis says. “And, while we’re certainly excited for our people and their incredible increases in agent production and market share, we know we’re just getting started. We’re committed to continuing to raise the bar and providing even more value for agents and their clients.”

This achievement in growth and volume is driven by the commitment and excellence of Keller Williams’ agents and is among many the company has enjoyed.

While each achievement is notable, the real story of Keller Williams' success begins several decades earlier.

Founded in 1983 in Austin, Texas, the company had a total of 32 agents that year who closed $28 million in volume. Keller Williams' first agent, Gary Gentry, wrote the first offer – for $55,000. After an auspicious start, the young company was soon reeling from the loss of seven of its top 10 producers to a competitor and was struggling in a tough Texas economy.

“It was a difficult time,” Gentry reflects. “But in retrospect it was a godsend, because if you learn how to survive and thrive in hard times, then when things change, you are going to do exceptionally well and you’ve been hardened and strengthened through the process. With the kind of training support that Gary [Keller] and Joe [Williams] gave us, we were constantly learning how to adapt to a different market. On a daily basis, we would discuss what the market was doing and what we needed to do to grow our businesses. A lot of our policy and culture was developed during this time.”

In 1986, Keller convened the first Associate Leadership Council (ALC) to reinvent Keller Williams from a traditional real estate company into one that would disrupt the industry. He shared his vision to create a new type of real estate company, where a world-class culture focused on the prosperity and well-being of its people would become an environment no agent or team ever wanted or needed to leave.

The ALC's subsequent sessions were the basis of the company's core belief system, the WI4C2TS. They also developed the profit share program, which treats associates who help the company grow as true business partners.

While the company didn't initially benefit from much name recognition or a national presence, Keller knew that by focusing on how the company could attract and retain top industry talent, everything would eventually fall into place.

“Gary Keller and our early leaders had a powerful vision for the kind of company we want to be,” Davis says. “The culture they created continues to permeate everything we do. And by building on that platform of training and technology, we’ve been able to develop systems and models and tools to help everyone achieve more.”

Keller and his colleagues were so focused on helping agents succeed, that in 2002 they brought a team of mega agents together for a mastermind session and raised the question, “What would it take to net a million dollars in personal income?” The brainstorming session resulted in models that would later serve as the basis for Keller’s first book, The Millionaire Real Estate Agent.

That book, which quickly became a national bestseller and today has sold more than 1 million copies, was the first of its kind to lay out economic, lead generation, budget and organizational models for, but not limited to, real estate agents. It gave Keller Williams a unique and powerful voice in the industry and became a catalyst for the company’s growth.

By 2006, through the leadership of executives like Mo Anderson and Mary Tennant, Keller Williams was the fifth-largest real estate franchise in the United States. Even during the Great Recession, profits grew as agents dug into their businesses and databases. By 2009, the company had moved past Prudential and RE/MAX to become third largest. In 2011, Keller Williams surpassed Century 21 as the number 2 real estate franchise in the country.

Within striking distance of taking the top spot, Keller Williams faced a critical transition. That year, the company's agent count actually declined to roughly 75,000. Now that KW had matured into one of the most formidable sales forces in the industry, it was time to institute more formal systems, accountability, and leadership to ensure that the company's success was predictable and sustainable.

Success – Built From Within

As Keller and his leadership team examined their most successful teams, they saw a unique trend. Each was succeeding through the leadership of John Davis and the models and systems he developed for growth.

As a team leader, Davis turned the Southlake - DFW market center into one of the most profitable Keller Williams offices, and he repeated that success with additional market centers and regions. He did so by holding powerful conversations that helped focus operating principals (OPs), team leaders (TLs), and market center administrators (MCAs) on the core activities that generate results. With healthy business practices being implemented at the local level, agent production grew.

The system was formalized as the “Growth Initiative” and Davis began training other market centers and regions. In 2012, he became Keller Williams’ vice president of growth, taking the Growth Initiative companywide. It proved to be just the system needed to rally leaders and agents alike – reigniting the company's success and attracting more agents by giving them the tools they needed to realize unprecedented production. Keller Williams became the number one real estate franchise in the United States by agent count the following year. In 2013, the company was the top real estate franchise by agent count in North America, and in 2014, more associates called Keller Williams home than any other real estate franchise in the world.

In July 2016, Keller Williams launched the Career Growth Initiative (CGI). Built on the success of the Growth Initiative, the CGI uses similar systems, models, and conversations to help individuals invigorate their business and further boost production.

At the core of Keller Williams' success lies the commitment to shared prosperity – a priority forged more than 30 years ago in that first ALC meeting. Each month, market centers share roughly half of their profit with the team members who helped achieve those gains.

Maximizing profitability requires creating an environment where agents can build thriving businesses. To help them do so, Keller Williams is committed to delivering the best systems, training, marketing, and innovative technology solutions. When agents and teams succeed, they attract other talented professionals, which helps the company grow and improves each team member's overall success – and profit share.

As more agents and teams have joined Keller Williams' ranks, the company has continued its climb, leading to its current position as the U.S. leader in agent count, closed units, and closed sales volume.

While this a milestone to be proud of, it is not the final destination for Keller Williams. It has simply positioned it for what’s next in an industry that is rapidly changing.

At the 2017 Family Reunion event in February, the next phase of Keller Williams’ evolution was announced: a commitment to developing the real estate platform that buyers and sellers prefer. And, as a result of its growth and a strong vision cast by Keller, the company plans to invest $1 billion in technology.

“World-class technology companies need to own their product vision, they can’t rent it. We can’t outsource our road map and vision because no one cares more about what you need to be successful than we do,” says Josh Team, chief innovation officer. “Our observation is the number one challenge an agent faces is the number of independent, disconnected technologies.” Agents may need to use as many as a dozen different software products and systems, according to the company's data.

With this investment, Keller Williams raises the bar in its commitment to providing the foremost resources agents need to elevate their businesses. This is crucial as companies pour billions of dollars into technology aimed at disintermediating the agent from the consumer. Yet, by its size alone, Keller Williams has the power of collective data and the magnitude to provide its agents with consumer insights no one can match. With this remarkable leverage, the company keeps agents at the center of the transaction, allowing them to build real estate businesses without limits or boundaries.

Respectfully Re-Posted from the KW Blog,