Summer in Sun Valley can be fleeting.  For instance, yesterday was glorious with big puffy clouds set against a brilliant blue sky. I drove up to the Sawtooth Mountains to put up a For Sale sign on a lot and I took a quick hike with the mutt. Yesterday I thought it doesn't get any better than this.

And now today, it's drizzly and the sun can hardly peek through the clouds. That's why it's good to get all the live music on your calendar right now so you don't miss a show. Everything is covered this summer - blues, hip hop, rock-n-roll, jazz, folk, chamber, soul and more. 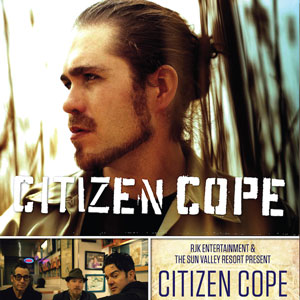 Citizen Cope (Clarence Greenwood) is an American songwriter, producer and performer. His music is commonly described as a mix of blues, soul, folk and rock. Citizen Cope’s compositions have been recorded by artists as varied as Carlos Santana, Dido, Pharoahe Monch and Richie Havens. He currently records and produces for his own record label, Rainwater Recordings, which he founded in 2010 after deciding not to work with major labels any longer. He had previously been signed to Capitol, Arista, DreamWorks and RCA.

G. Love & Special Sauce is an alternative hip hop band from Philadelphia, Pennsylvania. They are known for their unique, "sloppy", and "laid back" blues sound that encompasses classic R&B. The band features Garrett Dutton, better known as G. Love, Jeffrey Clemens on drums, and Jim Prescott on bass. 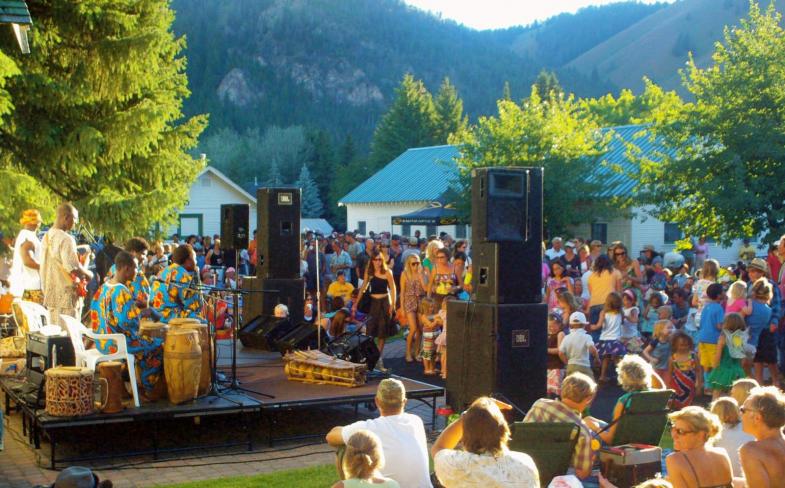 Ketch'em Alive and Jazz in the Park

Every summer, the City of Ketchum offers FREE concert series.

The local’s favorite concert series, “Ketch’em Alive,” is every Tuesday evening from 7 until 9 pm at the Forrest Service Park in downtown Ketchum. There will be dancing, music, and a fun-filled community party. Picnics are encouraged; food and drink will be sold in the park as well. Nationally touring bands will play rock, reggae, world beat, Americana, folk, etc.

Every Sunday “Jazz in the Park” will take place at the Ketchum Rotary Park. Many of Idaho’s best Jazz musicians will play a free concert from 6 to 8pm. Picnics are encouraged. 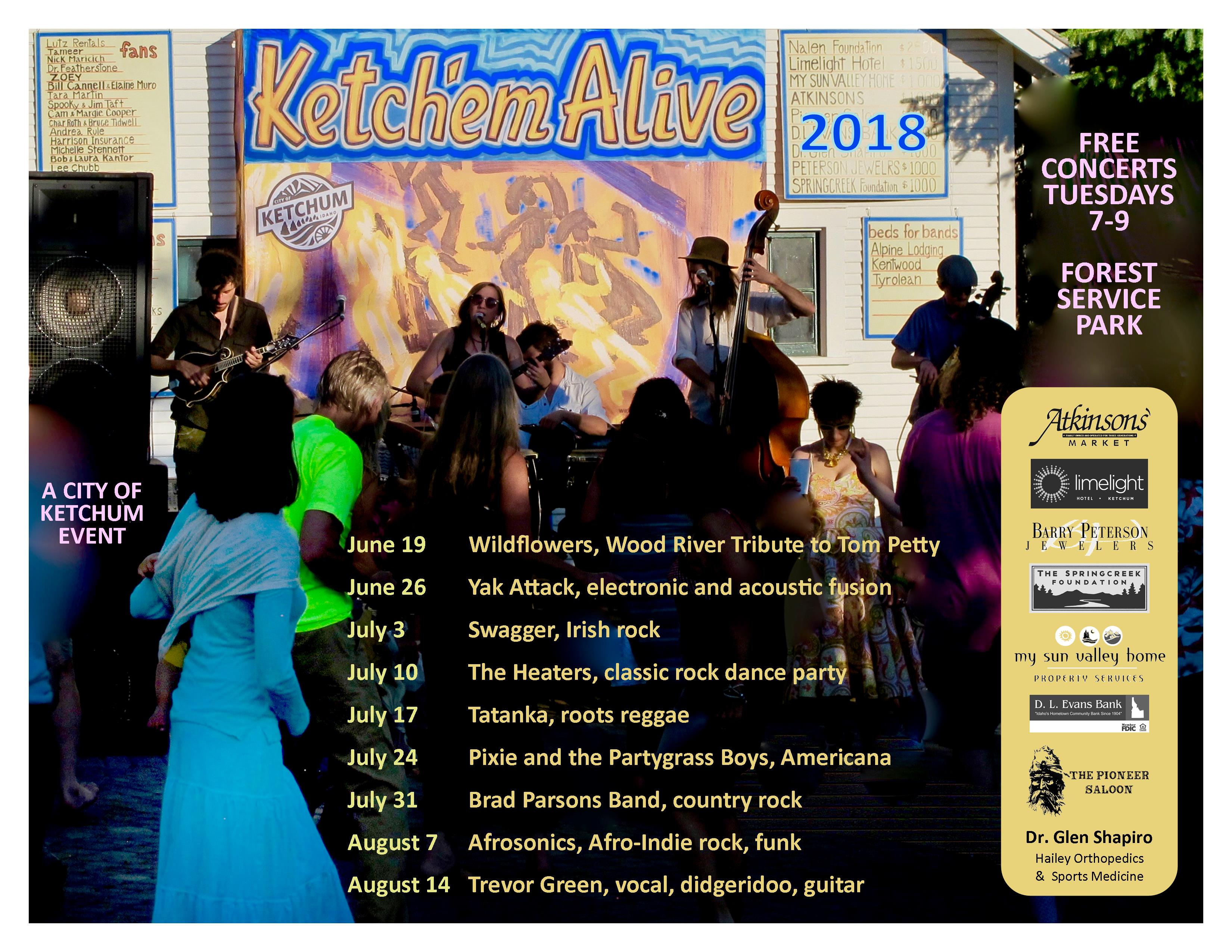 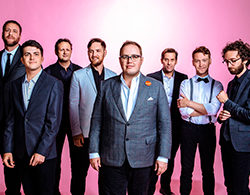 Opening the night will be the North Mississippi Allstars, a trio based in Hernando, Mississippi. With brothers Luther and Cody Dickinson in the lead, this southern rock and blues band will get the summer concert series off to a rollicking start. 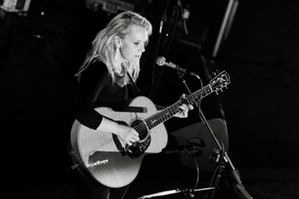 Flatland is little aid to contemplation, and so Mary Chapin Carpenter has her own hill. It’s deep in the Virginia countryside, on a farm that she got for a song. Or rather, for a bunch of songs, and a way of singing and playing them that has taken her around the world and back home, over and again. Carpenter and those songs have traveled for thirty years, though the songs are the most frequent fliers. They spring from her head and hands, vibrate through tonewoods and six steel strings, then find their way into microphones. Then they go forth into the world - they’ve been doing that for thirty years now—even at times when their creator sits at the top of her hill and observes natural wonders both human-made and mysterious.

Opening act will be Emily Barker. Emily Barker’s latest album Sweet Kind of Blue was recorded at Sam Phillips Recording Service in Memphis with Grammy winning producer Matt Ross-Spang (Jason Isbell, Margo Price) and an all-star cast of Memphis session players. The success of the album, with its seamless mix of soul, blues, country and folk influences, and the globe-trotting tours to support it helped land Emily the accolade of UK Artist of the Year at the recent UK Americana Awards held at Hackney Empire in London. 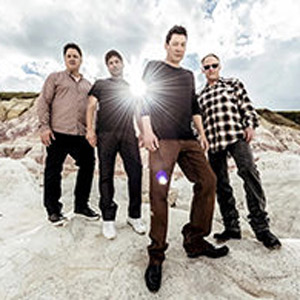 Big Head Todd and the Monsters with very special guest Shovels & Rope will rock River Run Lodge in Ketchum. Formed in Colorado in the late 80s, Big Head Todd has toured internationally and their album “Sister Sweetly” went platinum and had three singles that made the charts including “Bittersweet” and “Broken-Hearted Savior.” Favorites in the Rocky Mountains, Big Head Todd will be headlining their 20th show at the legendary Red Rocks Amphitheatre this summer.

Kicking off the Aug. 1 show with a full set will be husband-and-wife folk-rock duo Shovels & Rope. Based in Charleston, South Carolina, Cary Ann Hearst and Michael Trent each had their own solo careers before releasing an album together in 2008. In 2013, the pair won the Americana Music Award for emerging artist of the year and song of the year for “Birmingham.”

All summer long, the Lounge is the place to be for live music and happy hour. The Limelight Hotel hosts live music Thursday to Monday starting in late June through the end of September. The patio facing Baldy right in the heart of downtown Kechum is not just the place to be, it's the best place to be! Below is the Limelight Lounge schedule for the summer 2018 live music schedule: 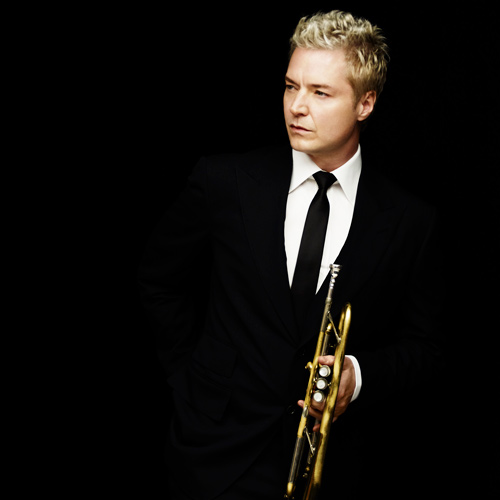 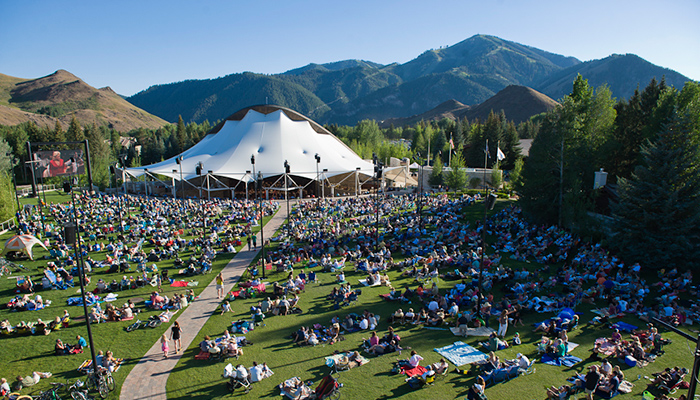 Sunday, August 19, 2018, 5:30 PMNOTE: there will be an intermission for this concert, and expected ending time is 8:00 PMPops NightHayman: Armed Forces MedleyWilliams: STAR WARS: A NEW HOPE – in Concert

For all the information on the Sun Valley Summer Symphony and any scheduling changes, Click Here.

Featuring The Infamous Stringdusters with opening acts Kuinka and AHI 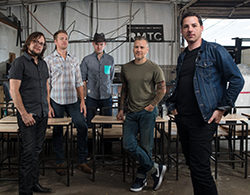 Closing out the summer concert series is Baldygrass One-Night Music Fest featuring The Infamous Stringdusters, Kuinka and AHI. This lineup combines bluegrass, Americana and an up-and-coming indie-soul artist to create a musical night that can’t be missed.

The Infamous Stringdusters are a leading light in bluegrass music who constantly push the boundaries for themselves and the genre. Though bluegrass is known for traditionalism, the ‘Dusters have consistently covered new ground, inspired fans and redefined what a bluegrass band can be. Playing everything from originals, traditional songs and completely unexpected covers of songs like “Get Lucky” by Daft Punk and The Cure’s “Just Like Heaven,” this band leaves no stone unturned in connecting with audiences young and not-so-young. Winners of the 2017 Grammy for Best Bluegrass Album, the ‘Dusters are recognized in the musical world and by their fans as outstanding performers and musicians.

The Baldygrass Fest will be a true mini-music festival, with two additional great groups on the bill. Seattle’s Kuinka is described by NPR Music as “joyous folk-pop” and features four-part harmonies with rotating lead singers and eclectic instrumentations including cello, banjo, synthesizers, six-string ukulele and electronic percussion. For all their sonic experimentation, the quartet’s songs and live shows are linked by an infectious energy that’s present in everything they do.

The not-to-be-missed AHI (pronounced “eye”) will kick off the final concert of the season. Hailing from Canada, this alt-folk songwriter has traveled more than 100,000 miles armed with an acoustic guitar and a voice like “gravel on silk.” One of NPR’s favorite discoveries of 2017, AHI delivers heartfelt stories with the ease of an old friend, and comparisons to Richie Havens, Ray LaMontagne and Tracy Chapman are common for this soulful troubadour.

And for more on the Arts and Culture in Sun Valley, go to VisitSunValley.

See you at the concerts!